As a child, Dr. Benneth Husted made house calls with her father, an osteopathic physician. He routinely visited several frail older patients who could no longer make the trip to his office. Following in her father’s footsteps, she became an osteopathic physician. After nine years in southern Oregon, in 1992 Dr. Husted moved to Portland, inspired to build a practice around older homebound patients like those her father cared for when she was a girl.

It took her three months to get her first referral: a 92-year-old woman with dementia who had not been outside her home in 10 years. This referral came through the Public Guardians Office. After that, word spread like wildfire through the case managers in the Aging & Disability Services system that there was a doctor in Portland not only willing but eager, to make house calls. Within another three months, she had 100 patients and had to turn new referrals away. Dr. Husted, along with future board member, Sister Patricia Nizic, SNJM incorporated Housecall Providers as a nonprofit charitable organization in 1995. 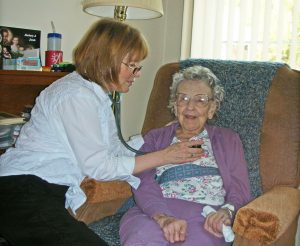 In 1996, she was joined by a second physician, and in 1998 by three nurse practition-ers. Since that time, Housecall Providers has experienced steady growth, adding hospice care to its services in 2009.

Since 1995, Housecall Providers has been improving lives by bringing health care home. Our home-based services have been an essential solution for more than 8,000 community members whose medical needs could not be met in a traditional clinical setting. People living with multiple chronic illnesses, many of whom have trouble leaving their homes, often rely on emergency room visits and hospitalizations to access even basic health care. These trips take a physical and emotional toll on individuals and their families and are very costly to our health care system. For Housecall Providers, bringing health care home means providing nearly 178,000 primary care home visits to vulnerable individuals throughout the Portland metropolitan area.