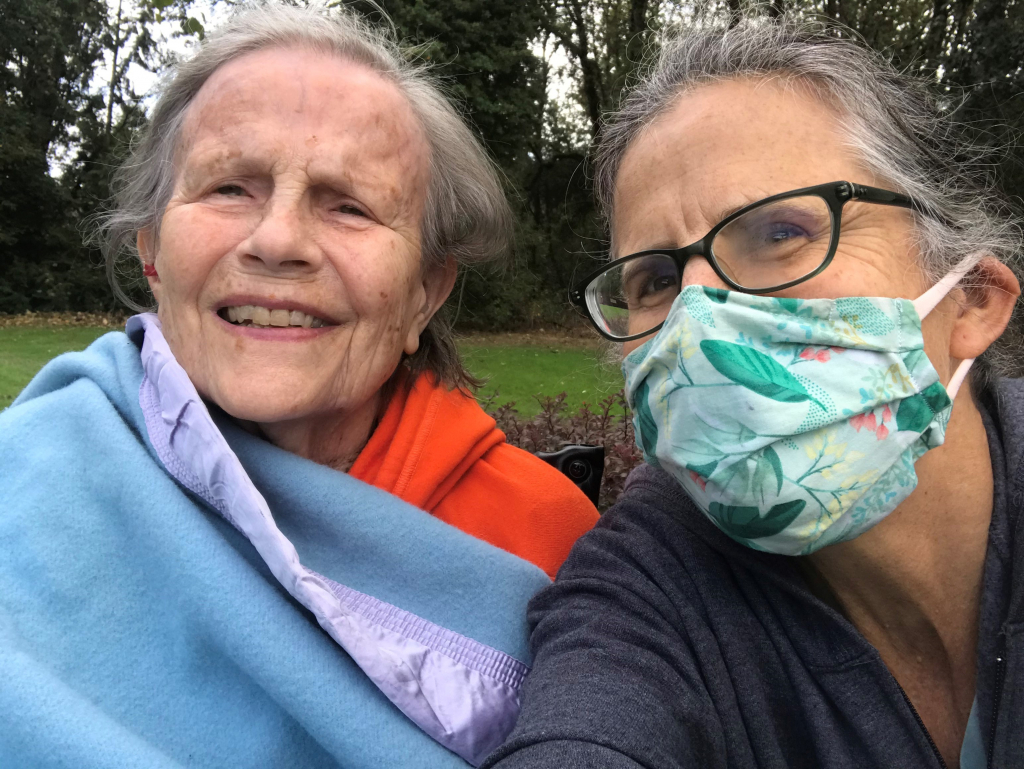 Dede and Patricia Montgomery sharing a bit of fresh air together at the park near the adult care home where her mother lived before moving in with her.

The early months of the COVID-19 pandemic were especially hard for Dede Montgomery. Her mother, Patricia, was living in an adult care home where understandable restrictions to keep residents and staff safe were also preventing families from visiting loved ones. Dede and her family had to settle for window visits. But because her mother had age-related macular degeneration coupled with dementia, these types of interactions were difficult. After three months when the weather warmed up, they were allowed to visit outdoors while wearing masks.

“It was one of the most difficult things I have gone through, especially knowing that her well-being and health were deteriorating,” says Dede.

Prior to the virus landing in Oregon, Dede’s mother had daily visits and outings with family and friends. Now, sometimes she wouldn’t have the energy to get out of bed, which meant that they couldn’t see her. On good days, though, her family would wheel her to a nearby park to sit in the sunshine, listen to music, talk and read.

“Our mom stopped walking during this period – I believe because she wasn’t going on outings with family,” says Dede.

Although they were fortunate with warm weather, Dede worried with the approach of fall that visits with her mother would diminish due to inside restrictions not being lifted.

“Our inability to visit outdoors during the week of the wildfires was awful,” says Dede “This was around the time when I made the decision to prepare to move her into our home. I was mandated to work from home, so I knew she could be there with us.”

Her employee assistance program at work provided information that helped her make the decision, and she applied for and received FMLA in case there were weeks she couldn’t get all her work hours completed.

“I was very fortunate to have supportive work supervisors, colleagues and household members, so mom was able to move in with us the morning of Halloween,” says Dede.

The move allowed the family to be with Patricia during her wakeful times, which in the past were difficult to predict because she was in the care home. Though she slept a lot, since her bedroom was the former dining room or “Grand Center,” as Dede puts it, she got to see a lot of family members through the day.

“We would listen to music together much of the time, read a lot, visit or sit quietly with her as she was dozing,” says Dede.

Dede requested a hospice consultation a few months after her mother – a Housecall Providers primary care patient since October of 2019 – moved in because she remembered friends telling her that they had wished they had called earlier when the time came for end-of-life care.

“I half expected her not to meet the hospice criteria because other than dementia, her health was good,” says Dede. “Our family was incredibly relieved when she was accepted, and I was impressed with the seamless transition between primary care and hospice. It made it all so easy to handle and I felt so supported.”

Dede says that the hospice team helped them be better informed, so they in turn could make better decisions. An example of this is when they advised her not to get her mother up from her hospital bed into a wheelchair since she would only sleep in the chair and it was exhausting her further. Additionally, the advice on feeding and when to no longer offer food was perhaps the single most powerful information that the family received.

“The 24-hour advice nurse phone line was perhaps, for me, the most important service,” says Dede. “I’m not sure how many times I called, usually for simple things, but I never felt like I was asking a silly question and the clinician was always kind, understanding and compassionate.”

Her mother passed about four months after she moved in with the family, spending nearly five weeks on hospice. Dede has written about her experience caring for her mother at the end of life on her blog (dedemontgomery.com) in the article 127 nights to treasure forever.

“Being with my mom through the dying process in our home and without a health care provider in the room was one of the most beautiful, difficult and important things I have done in my life,” says Dede.

“I am eternally grateful I made the decision to bring her home.”