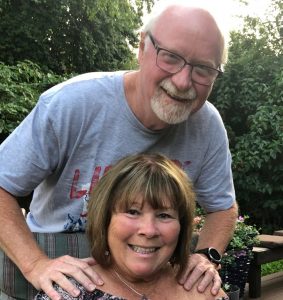 When you feel passionate about a cause close to your heart, there always seems to be a way to talk to friends and family about its merit and benefit to society. Friends of Marsha and Dick Yandell know this firsthand, ever since the duo added a fundraising component three years ago to Marsha’s annual birthday golf tournament. This gave friends and family the opportunity to support “Bringing Music Home,” a Housecall Providers program that Dick has volunteered with since 2016.

Dick was introduced to Housecall Providers through caring for his 98-year-old father. Like many people who care for loved ones with dementia, he struggled to keep up with the medical challenges that many people afflicted with the illness face. “After 10 years of caring for my father, it was a godsend to find out about Housecall Providers,” says Dick. “The care that dad received made a huge impression on me and my family.”

Early in 2016, Dick and Marsha noticed a small article in the Housecall Providers newsletter about Bringing Music Home. The program seemed like a perfect volunteer opportunity because Dick is what Marsha calls an “audiophile.” Music has always played a large part in Dick’s life, whether playing in a band or putting together playlists for his own enjoyment and that of his friends. Extending his hobby to create playlists for dementia and hospice patients seemed a perfect way to give back and do something that he loves. He was one of the first volunteers of Bringing Music Home and has been with the program ever since.

“Dick really knows his music, but it’s his dedication to our patient population that really sets him apart,” says Volunteer Coordinator Todd Lawrence.

Because all their friends already know about Dick’s volunteer work with Housecall Providers, it was natural and easy to incorporate a little fundraising into this annual golf event. Marsha and Dick tell stories about the program, inspiring their friends to contribute. Over the last three years, the Yandells have raised more than $3,500 for the music program.

Not only have the Yandells been supporters of this program, they are also beneficiaries of it. They now help care for Dick’s 96-year-old aunt, a Housecall Providers patient who has dementia. Earlier this year, she received her own MP3 player and speaker from the music program.

“My aunt constantly tells us how wonderful the music is and how much she enjoys it,” says Marsha. “Her caregivers say you can often hear her singing along to her favorite songs, and it has helped calm her agitation and brought her peace.”

Thanks to the generosity of the Yandells, more homebound and chronically ill people will have an opportunity to have a personalized playlist. And that is music to everyone’s ears.