Family grateful for the care loved one received on hospice 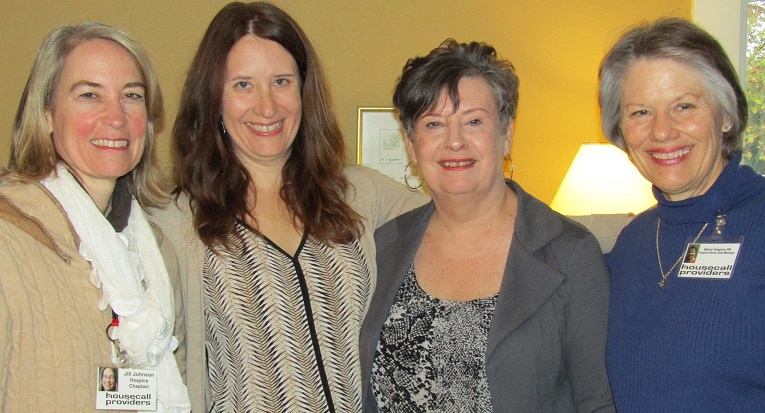 Marjorie Fitzpatrick, a former Housecall Providers Hospice patient, was a woman truly ahead of her time. She was someone who was passionate about people and dedicated her life to closing the gap that racial, cultural, and socioeconomic differences created.

“Growing up in St. Louis, mom would host international students who were working on their graduate degrees,” remembers daughter Victoria Etchemendy. “At different times we had Buddhists, Hindus, and Muslims and others from different nationalities, faith and traditions living with us and she would help these students navigate life in America.”

A Russian houseguest stands out in Victoria’s memory. He wanted his picture taken with Marjorie and Victoria because his family was sure that his hosts were going to kill him. “It was a very dramatic thing to welcome foreigners into your home during the 1950’s,” Victoria stated.

Once a month, Marjorie would host coffee at her house and invite her former houseguests. “All these people would come to coffee, some whose countries were at war, and they would show each other the pictures of their children. For me, that was what made me who I am. I saw that everyone is the same and that is how my mom lived,” Victoria said.

The energetic, creative and caring woman volunteered her time wherever it was needed. She was active in the Democratic Party and, in the 1950s, in the NAACP. Her volunteerism led to a career in managing volunteers for major organizations. Her career and charitable passions took her to other parts of the U.S. Finally, the years caught up with her. At age 86, her health deteriorating, she moved to Portland to be near Victoria and Stephanie, her granddaughter.

Once in Portland, she was accepted as a patient in Housecall Providers’ primary care service. Marjorie started receiving in-home primary medical care from Family Nurse Practitioner, Natalya Balanetskaya. “Natalya had my mother’s best interest at heart, but it took time for her to understand, really understand what Marjorie wanted. She didn’t want tests or interventions or to go to the emergency room, so when she did, Natalya was a great advocate for her there too, especially at the end of her life,” Victoria said.

Almost two years after becoming a patient, Marjorie’s health experienced a rapid decline, which prompted admission to Housecall Providers Hospice as well as the move to Riverview Adult Care Home in Lake Oswego, so she could receive more personalized care. Once at Riverview, Marjorie’s health stabilized and she experienced a dramatic turnaround. Because of this, she was taken off hospice, but it wasn’t long before another health crisis had her right back on. This fluctuation happened a couple more times; it’s not unusual for patients to go on and off hospice the way Marjorie did. A fall this July placed her back on hospice for the final time. She passed away just months later.

“Natalya and the hospice team really supported us through some tough decisions and those last few months were harrowing and difficult and challenging. ‘What is the right thing to do here? What is the right thing here?’ The knowledge and guidance they offered made the choices that much easier to make,” Victoria said.
Nancy Gregory [nurse], Jill Johnson [chaplain], Taylor Clark [social worker] Dee Dee Bacon [CNA] and two different volunteers made up Marjorie’s hospice team. Victoria remembers her mom telling her over and over again how fortunate she felt to have these visits and what they meant to her.

“I felt that this was an exceptional care team,” Victoria said.

Marjorie Fitzpatrick lived an exemplary life, and her passing, in Housecall Providers Hospice, proved to be a peaceful and fitting one, surrounded by those she loved best.