Farewell to a house call champion 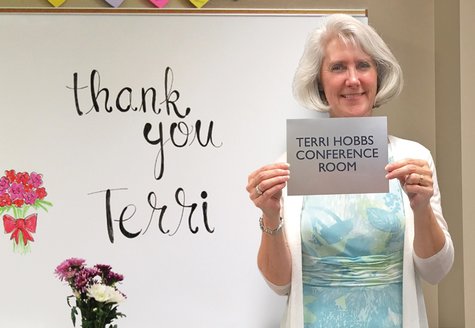 Terri Hobbs moments after being honored by the Housecall Providers staff.

It’s a handful of people across America who have worked tirelessly within the last two decades to bring the house call back from near extinction. Among the members of that elite group: Terri Hobbs.

The former executive director of Housecall Providers gave her blood, sweat and tears the last 16 years to ensure that, above all else, home-based medicine would survive in Portland. There were years when it seemed that desire would only be a dream amid the uncertainty of public and private support and the shortfall, growing larger each year, between what a house call “costs” and its reimbursement rate.

It was in then that the organization’s resilient spirit shined forth.

“When it appeared that we were in our final hour, something would always come along that ensured we would live to fight another day,” says Hobbs. “A grant would come through, a large bequest, or that long-awaited check – they all seemed to arrive about one or two days before payroll. Our faith was tested regularly but those ‘wins’ gave us the courage to continue.”

Sacrifice was a necessary element for survival back then. Staff accepted what needed to happen because they knew what was at stake. On top of managing the business, between 2007- 2010, Hobbs was also in charge of the billing department, community resources and fund development. In 2011, she became executive director as Founder Dr. Benneth Husted stepped back.

“I am so humbled by the sacrifices made by staff to keep our mission alive,” says Hobbs. “Early in the 2000s, when we ended two fiscal years significantly in the red, that was our moment of truth when we had to ask ourselves the hard question, ‘Can we continue?’ and the answer was always a resounding ‘Yes!’”

According to Hobbs, what she is most proud of is the impact that Housecall Providers has had locally as well as nationally.

“Being number one in the nation two years in a row with the Independence at Home (IAH) demonstration really put us on the map and suddenly we were getting calls from across the nation,” says Hobbs. “To have our model validated and held up as the gold standard is a testament to the staff and their commitment to excellent patient-centered care.”

With Housecall Providers now part of the CareOregon family, it has what it needed all along: a like-minded partner. CareOregon not only knows the vital role house calls currently play within our community, but also the enormous potential they have to be an agent of change within the health care system for years to come.

“The vision that Rebecca [Ramsay, executive director] and the rest of the leadership team is putting forth is exactly what we need to sustainably transform home-based medicine in Portland and beyond,” says Hobbs. “I am so appreciative of CareOregon that they saw the inherent value of our program and are invested in seeing Housecall Providers not only survives but thrives.”

Staff and board members who have worked with Hobbs the last 16 years know that it was because of her compassion for and commitment to the patients that gave her the courage to do whatever was necessary to keep the service viable. Last month they paid tribute to her with a celebratory luncheon honoring her years of service. Ramsay’s remarks echoed the thoughts of many in the room.

“After meeting Terri and learning more about Housecall Providers’ past, I let the CareOregon leadership know that this is where I wanted to be,” says Ramsay. “She left some very big shoes to fill, but also a spirit of resiliency and hope that will carry us towards her goal of one day making home-based medicine a norm in our community.”

After taking some well-deserved time off, Hobbs plans to reengage in her support of home-based primary medical care working locally and nationally towards the goal of seeing IAH become a Medicare program.

“I want to focus my energies towards having home-based primary care become a standard in Oregon,” says Hobbs. “When the times comes, this is the care that I want for myself.”

Thanks to Hobbs, that care could likely be delivered by Housecall Providers.