The two women laugh and swap stories about family and Williams’ bridge games. Then Gurgle asks Williams a series of questions about a troubling symptom the senior has experienced of late — vomiting after breakfast. Gurgle goes over Williams’ history and her daily medications, looking for clues, and orders lab tests.

The 45-minute primary care visit is pretty standard stuff, except for one thing. It takes place not in a medical clinic but in Williams’ home, which happens to be a one-bedroom unit at The Fountains Assisted Living Facility in Southeast Portland. Gurgle sees patients this way routinely, as a primary care practitioner with the Portland-based nonprofit Housecall Providers, which provides primary, palliative and hospice care to 1,850 patients.

“When a patient comes to the office, they have to become part of your picture, sit in your waiting room, come there at a certain time,” Gurgle said. “It’s helpful to meet them where they’re at. You get so much more of a sense of what’s going on with them physically, mentally and healthwise when you’re in their environment.” 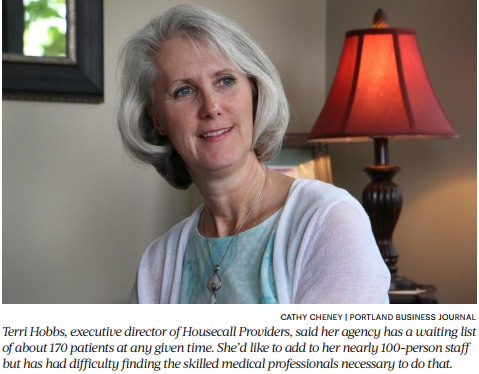 House calls may seem like a throwback to an earlier era — the country doctor making his rounds with stethoscope, thermometer and tongue depressors tucked in his black bag. But they are alive and well — though in small doses — in modern medicine and are a promising antidote for skyrocketing health care costs, particular for seniors and those suffering from chronic conditions and disabilities.

The results of a national Medicare demonstration project prove the point. The pilot project found that providing primary care to vulnerable individuals in their homes saved the system roughly $35 million over two years. And it seems Housecall Providers, which participated in the pilot, has the right formula. It delivered the most savings to Medicare in both years.

There are hurdles to delivering primary care to patients in their homes, including the inflexibility of traditional payment models and the lack of a trained workforce. But the results of the Medicare study could make Housecall Providers a model for how health care is delivered in the future.

“It’s back to the future with the delivery model,” said Richard Gundling, senior vice president at the Healthcare Financial Management Association in Washington, D.C. “A certain population will want it and be willing to pay for it. As the whole area of consumerism grows in health care, it will be one way that innovation can help consumers take care of their health.”

Savings in the house

About 5 percent of Medicare recipients, the sickest patients, account for 50 percent of the agency’s costs for their complex and expensive care. A major contributing factor is that these are folks who have difficulty getting out of their homes to a doctor’s appointment and may end up in the emergency room when things go wrong.

A growing number of health care reform advocates believes house calls could be a remedy. U.S. Senator Ron Wyden is among them. The Oregon Democrat co-sponsored legislation in 2009 that created Medicare’s Independence at Home Demonstration Project.

“Patients with multiple chronic conditions spend far too much of their time trying to coordinate an inefficient and expensive patchwork of healthcare delivery systems, leaving little time to enjoy their lives,” Wyden said at the time. “The Independence at Home Act will address the challenges of caring for persons with chronic conditions by better integrating their care and working with their caregivers to manage their conditions and medications.”

Launched in 2012, the project was designed to provide primary care to the chronically ill at home. It was also a test to see whether home-based care could reduce the need for hospitalization, improve both patient and caregiver satisfaction, improve beneficiaries’ health and reduce costs. To qualify for incentive payments, participating providers are measured in six categories, including all-cause hospital readmissions within 30 days and follow-up contact within 48 hours of hospital admission, discharges, and ER visits. 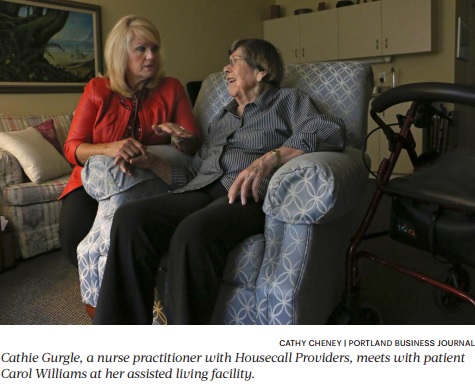 According to year two results announced in August, Housecall Providers saved Medicare more than $1.8 million in additional expenses. The nonprofit saved 26 percent over the control group that didn’t receive in-home primary care. It also hit all six quality measures associated with treating the 249 patients in the program, earning it $1.1 million as its share of the savings.

All told, Housecall Providers posted the best results among the 15 in-home health agencies nationwide that participated in the pilot. Collectively, they saved Medicare more than $10 million in year two, or an average of $1,010 per participating beneficiary, according to the U.S. Centers for Medicare and Medicaid Services. The savings wasn’t as great as the first year of the program, $25 million, due to revisions to the methodology used in the calculation of savings, but it was still significant.

The program is set to end in the fall of 2017, but Wyden hopes to make it permanent. It may also be expanded to a greater portion of the Medicare population, though the parameters are still being worked out in a bill pending in the Senate.

Putting out the welcome mat

Dr. Benneth Husted, who had watched her doctor father treat his frail, elderly patients at home when she was growing up, founded Housecall Providers in 1995, after practicing medicine out of her own Southeast Portland home for several years. The organization depended on grant funding in the first few years but eventually grew its budget to $10 million a year. Husted retired in 2014.

Most, or 85 percent, of the agency’s patients are on Medicare, with another 10 percent on Medicaid and 5 percent on commercial plans.

Since its founding, Housecall Providers has made more than 135,000 house calls and served 7,000-plus patients, becoming one of the largest providers of in-home care in the Western U.S. While most of Housecall’s clients are elderly — the average age is 79 — 20 percent are below the age of 65. All told, Housecall’s clients make a third fewer return trips to the hospital within 30 days of release than the general Medicare population.

Demand for its services, and for in-home primary care overall, is expected to grow. Oregon’s population is aging. Currently, about 19 percent of residents, or 745,000 people, are on Medicare. If it grows in sync with national projections, that number will balloon by 27 percent by 2020. Already, Housecall Providers has a waiting list of up to 170 patients in the Portland area at any given time.

Nationwide, the Home Centered Care Institute estimates there are 2 million homebound patients, only 15 percent of whom receive home-based medicine. There may be as many as 16,000 home-bound patients in Oregon, a population that is largely hidden.

“They’re not the people you see in the grocery stores or restaurants,” Hobbs said.

“A lot of the same organizations (offering home-based care) a decade ago were saying, ‘We’ve got to build more hospital capacity.’ It was real estate models of care,” said Eric Dishman, who focused, among other things, on aging-in-place technology when he headed up Intel Corp.’s Health & Life Sciences Group.

“In an era of payment reform and overstressed systems, one strategy is precision medicine and care, which may include prevention and treatment where people are. We need incentives, payment reform and new care models — team and quality-based and home-based — to achieve the results we want,” said Dishman, who now heads up the Precision Medicine Initiative at the National Institutes of Health in Washington, D.C.

The home-based model isn’t without barriers, which include liability issues and legitimate concerns over cost and inefficiency. 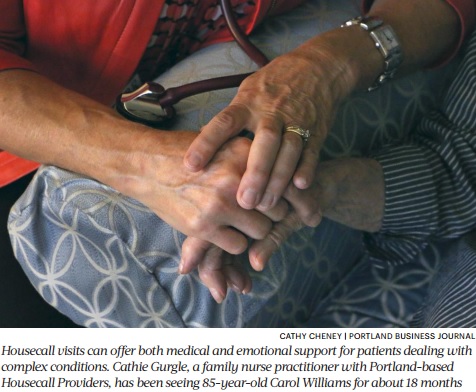 Traditional payment models were set up for the 20-minute office visit, not to cover the extra time and attention required by a home visit. The higher the volume, the higher the revenue.

Because Housecall Providers is reimbursed under this “fee for service” arrangement, it relies on community support, grants, fundraising and hospice services to help cover the additional cost that comes with not only longer visits, but also seeing fewer patients in a day due to travel time between homes.

Most any health provider will say they’re underpaid by Medicare — hospitals get 78 cents on each dollar spent providing care. While the program reimburses home-based care at a slightly higher rate than an office visit, it still isn’t enough to cover costs. Housecall Providers estimates it loses about $100 or more per visit, especially given all the support staff that assist in patient care, including social workers, nurses and chaplains.

The model is changing, albeit slowly, for the health care industry in general. The Independence at Home project model is “value based,” with providers paid based on outcomes and keeping a patient population healthy, and Medicare shares the savings with the providers.

Besides funding, an equally big challenge ahead, particularly as the population ages, is workforce development. Of Housecall Providers’ staff of 93, 67 are directly involved in patient care. The agency would like to add more.

“Workforce (shortage) keeps us from growing,” Hobbs said. There

There are efforts underway to expand the house call ranks. Hobbs is deeply involved in The House Call Project, a national effort to develop a home-care curriculum that can be used by medical and nursing programs. Housecall Providers might serve as a national training site, where students would come for one-to three-month rotations as they are “preceptored” by seasoned pros.

“This kind of medicine is not something people are exposed to in training -— it’s a different skill set that creates a steep learning curve,” said Dr. Pam Miner, Housecall Providers’ medical director.

Providing home-based care isn’t for everyone. The work can be rewarding but grueling, what with the driving required, on top of the usual voluminous paperwork duties. Burnout isn’t uncommon.

The provider works alone, without the immediate support of a larger staff, and deals with very ill, complex patients. And because these patients can’t easily get out to see a specialist, the home-health provider may have to figure out workable alternatives.

The care model requires excellent communication skills and a comfort level for working in a patient’s environment, rather than the clinic setting. This changes the dynamic in ways that may make some providers uncomfortable. But on the plus side, it can lend the clinician insights into a patient’s psycho-social needs — food insecurity, housing issues or family members’ struggles to provide day-to-day care.

The right kind of person can thrive on the independence and autonomy. Gurgle, the family nurse practitioner, sees about half a dozen patients on a typical day, but it could be more or fewer, depending on their issues.

“In an office, I’d see 20 patients a day,” Gurgle said. “You can’t do that in the field where you have higher complexity patients.”

Gurgle puts about 50 miles a day on her two-year-old Nissan Acura and uses the time in between visits for follow-up phone calls with family caregivers.

“That’s my office,” Gurgle said. “I try to be as efficient as I can with my driving time.”

She worked early in her career in hospital and medical offices, then took a job with a home health and hospice agency in Eastern Washington.

“I fell in love with it,” Gurgle said. “I can remember some of the other nurses in the agency who were more seasoned, who would talk about having a difficult patient or a not so wonderful place to visit — maybe the home wasn’t very nice. I said, ‘I’ll go.’ To me, it’s an adventure.”

A week after the appointment with Williams at the assisted living facility, Gurgle returned with the lab results. It turns out Williams may have had a urinary tract infection that was upsetting her stomach. Gurgle orders a course of antibiotics and suggests an abdominal ultrasound if the symptoms don’t improve. They adjust a few other items, such as vitamins and aspirin dosing.

Williams, who also has Parkinson’s disease and not long ago had foot surgery, said she learned about Housecall Providers when she moved into assisted living about 18 months ago. She hasn’t looked back.

“To me, it’s working beautifully,” Williams said. “I don’t have to get on the bus and go anywhere.”