by Dan Cook, To the Point 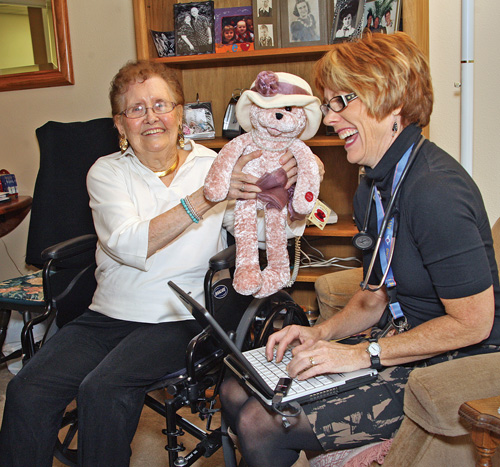 Helen Hoar never wanted to leave her home, one she and her husband built and lived in together for many years. Even after her husband passed away, Helen continued to keep the home up, helped by her family members. As Helen became increasingly frail, she and her family turned to Housecall Providers, where her granddaughter Terri Hobbs worked, to provide in-home health care. But finally, by 2010, the family was forced to acknowledge that they could no longer properly care for her in her home.

They selected Summerplace, a warm, sunny residence in Portland, for Helen. After a period of adjustment, Helen, who is in her mid-90s, began to appreciate the cheerful atmosphere, the good meals and social activities there. And then there were the regular visits from Ginger Harris, her Housecall Providers nurse practitioner, to look forward to.

Ginger is known for her high-energy approach to work and life. The same can be said of Helen, whose eyes sparkle with fun and amusement as she catches up with Ginger and comments on her stylish boots. Ginger arrives with a smile on her face and checks Helen’s blood pressure and other vital signs. She checks in with Helen’s family members who frequently visit Helen. The family of a Housecall Providers patient is a crucial part of the care-giving team. For instance, one sign that Helen was beginning to accept Summerplace as her home was her weight. “She’d been losing weight while living in her own home, she wasn’t eating properly,” Terri says. “Since she’s been here, she’s put on weight and looks much healthier and stronger.”

Ginger will see about five patients on an average day and carries a panel of about 75 patients. She’ll tell you that there is no “average” patient; some are lively and engaging, like Helen, while others are less active and communicative. With Housecall Providers’ Ginger Harris on her case and her family at her side, Helen has flourished in her new home—and may even have to go on a diet to avoid replacing her entire wardrobe.