Listening, the first step to CareOregon supporting its aging members 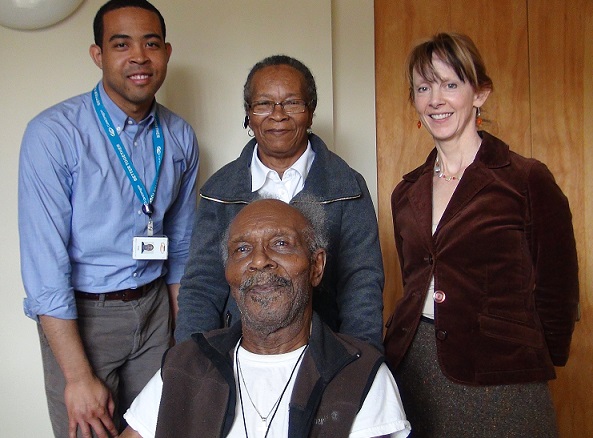 Nearly a quarter of Housecall Providers patients are insured through CareOregon
What do control and independence – to the greatest extent possible – really look like as people go through the aging process? Does it mean staying in your own home, but not doing some of the work associated with keeping it up? Does it mean being able to drive, shop for yourself or walk?

These are the types of questions that members of CareOregon’s 3D team – (Discovery, Design and Development) Jennifer Pratt and Uriel Frazier are asking as part of their research into how to best support older adults in retaining control and independence as they age. The two met recently with Housecall Providers program staff with the goal of exploring this subject further.

The team had already conducted research of its members and community providers to hone in on what they thought would be important to people in the latter stages of their lives. They heard resoundingly that independence and control were really at the heart of what made people “feel alive” and “enjoy life”.

The 3D team is collecting information through a process called Human Centered Design that relies heavily upon feedback from a particular group, in this case, CareOregon’s senior population, to uncover latent needs, behaviors, and desires. The data, collected from the interviews, will then be used to help shape innovative programs, products and services for the nonprofit health insurance company’s aging members.

Jennifer and Uriel interviewed Housecall Providers patients in the hopes of understanding what the essential elements are that make one feel more independent or dependent. They asked both closed and open-ended questions such as: “describe what your perfect day looks like?” and “if you lost one particular activity of life – like driving, would that mean a loss of independence to you?” Questions were aimed at trying to identify if loss of independence is one event or more of a progression with multiple smaller losses creating the turning point.

The 3D team is zeroing in on these answers and the knowledge gained will help create innovative services and products for CareOregon members who desire to age in place with the most independence and control possible.