Memorial giving, a way for families to give back

The weeks before a homebound member of our community becomes a Housecall Providers patient can be some of the most trying and difficult times for a family. Usually, the soon-to-be patient experiences a health crisis that leaves relatives scrambling to figure out the best options available.

Marilyn Fink and her family know this scenario all too well. Two years ago when her mother-in-law, Irene, had a sudden health complication requiring hospitalization, it became clear she would be unable to return to the facility where she and her husband had lived for years. Hospital staff suggested another placement and Irene moved in, but shortly thereafter, her family realized it wasn’t a good fit.

“At one point, I was in the hallway in tears and Pam Bacon, a nurse from Providence, stopped me and asked if there was anything she could do to help. I said that we just can’t seem to get the care we need for our family member and she said, you need to call Housecall Providers,” Marilyn remembered.

After researching Housecall Providers, Marilyn knew this was exactly the kind of care her mother-in-law needed. She called and in a month’s time, Irene was on service. Her new primary care provider, JC Provost, DNP, FNP-C recommended another facility where she would receive greater attention, and because it had a memory care unit, her husband could join her there too. 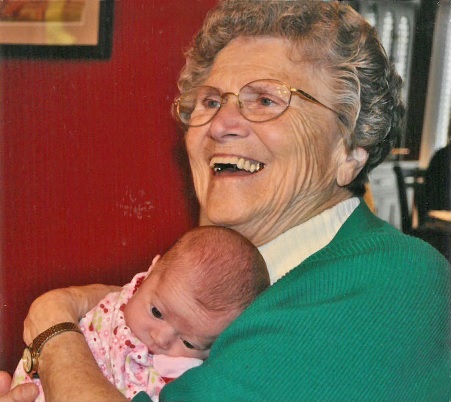 Irene thoroughly enjoying a moment with her great granddaughter, Emily.

“The staff of Housecall Providers made it so easy for us. If a medication needed tweaking, or we thought she might have an infection– right away, they were on it,” Marilyn stated.

“This period can be such a tough time in people’s lives,” she continued. “If you can’t take care of your family member at home, you want them to be loved and cared for at the highest level and that is exactly what Irene and our family received from Housecall Providers.”

Irene passed away last December on Housecall Providers Hospice. The care and attention she received prompted the Fink family to designate memorial gifts to Housecall Providers. “Irene had been through so much before we found Housecall Providers. We couldn’t have done it without their supportive staff and we wanted to give something back to the organization that had given so much to us,” Marilyn said.