Hospice veteran returns to his roots 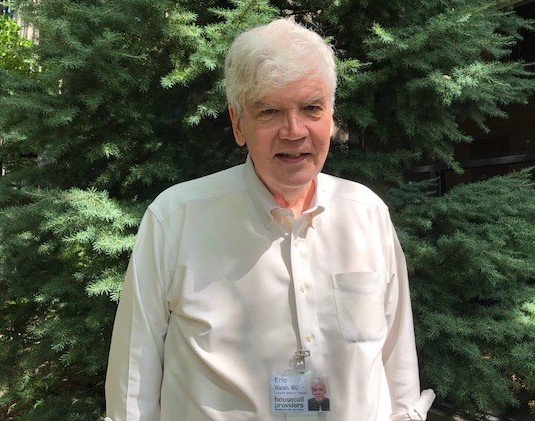 This summer, Housecall Providers welcomed Dr. Eric Walsh as its new Hospice Medical Director. Joining the Housecall Providers team is a homecoming of sorts for a provider who spent his early career in the south Bronx working at a full-service family clinic serving the poorest congressional district in the country.

“We were a big clinic that took care of a very poor neighborhood; 20,000 people could walk through the front door without crossing a street,” says Dr. Walsh.

A year later, he was offered the job of hospice medical director at the Bronx Hospice Visiting Nurse Service of New York when the AIDS epidemic was in the acceleration phase.

“It was the second year (1984) that hospice was a Medicare benefit and nobody had any experience,” says Dr. Walsh.

“I knew something about pain management, but nothing like now,” continues Dr. Walsh who credits his nurse colleagues for providing 98 percent of his hospice education early on.

A seasoned educator, Dr. Walsh has been a preceptor and taught at several colleges and university in New York and Oregon. Most recently he was the Professor of Medicine, Division of Hematology and Medical Oncology, OHSU.

He also was one of four founding members of the Institute for Family Health, a New York nonprofit catering to marginalized and underserved populations. The 27 community health centers serve nearly 100,000 patients a year.

Most recently, Dr. Walsh was the medical director at Kindred Hospice for 10 years and was looking to move to a smaller organization – one with local leadership where, if things needed to happen, he could potentially have a role in making change occur.

“It was very attractive to me when Housecall Providers and CareOregon unified last summer because it reminded me of my work in New York: a population-based, continuum of care across primary, palliative and hospice that focuses on the underserved,” says Dr. Walsh

Dr. Walsh moved to Portland in 1995, the same year that Housecall Providers started. From first learning about the organization, he has been impressed with the whole model of care. Apparently, it ran both ways, as Dr. Walsh was asked to share his hospice expertise with our primary care team before our own program was created in 2009.

So, when the time came to make the leap and look for a new job, he only visited one website: Housecall Providers.

“A lot of my life has been determined by luck,” says Dr. Walsh. “And, as luck would have it, the hospice medical director position had just opened, and I was the first person to apply.”

As our patients, family members, caregivers and staff are finding out, he isn’t the only lucky one.