No more trips to the hospital 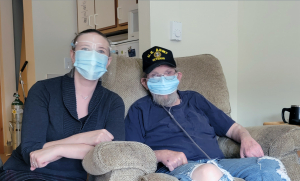 Jeff Olson has endured quite a lot in his 66 years. After spending his childhood in and around Astoria and graduating from Rex Putnam High School in Milwaukie, at 17 he enlisted in the Army, where he spent nine years as a mechanic. “They promised me I would be a driver when I signed up, but my test scores prevented that from happening,” he says.

After his military service, he returned to the Astoria area where he spent a few years working on fishing boats and at the docks before becoming a truck driver. Nearly a decade later, a traffic violation ended his driving career and his life started to unravel. He worked odd jobs for a while, never quite keeping his head above water. Eventually, he lost his housing.

Jeff spent several years living on the streets, and his health started to deteriorate. His back and neck began to hurt constantly, an affliction he’s still managing today. His breathing became labored, and he developed COPD along with emphysema. With a mounting list of challenges and a meager disability income, Jeff moved into an apartment in east Portland where break-ins and trouble were a constant backdrop. He finally found an apartment in Tigard, where he was able to spend several years in relative peace.

At this point, though, Jeff’s failing health and upstairs apartment led to a new problem: falling down. He estimates that he called 911 around 20 times during his final year in Tigard, most of which led to trips to the emergency department. He recalls the Tualatin Valley Fire and Rescue (TVFR) emergency responders with some fondness despite always encountering them under difficult circumstances. He recalls the time they brought his cat to a shelter to be cared for while he was hospitalized and sent a team to clean his apartment while he was away. When Jeff was referred to Housecall Providers’ Advanced Illness Care (AIC) program, the team met with TVFR and learned that Jeff was on their frequent caller list for months and they knew him on a first-name basis!

Once Jeff was in our care, the AIC team started the process of helping him find an assisted living facility. When he transitioned to primary care, the move-in was completed. Social worker Sarah Jo Tomlin was with him the day he moved into his new apartment. The team worked to stabilize his health issues and got him an electric scooter/wheelchair to help him get around. On a recent visit, she remarked on how well he was doing. “I cannot tell you how relieved and happy I am to see Jeff in a setting where he can get around easily and where there are staff to assist him with his needs,” says Sarah. “I am really glad this move happened before he had a major fall.”

Since becoming a patient at Housecall Providers, Jeff has not been to the hospital a single time! His health situation has stabilized, and his living situation no longer poses a threat to his safety. He still suffers from neck and back and pain, but his emphysema and COPD are being managed by his in-home medical team. He says he would like to take a trip out to Fort Stevens to see the old property where he used to live. He’s looking forward in his life, which has been difficult in the past.