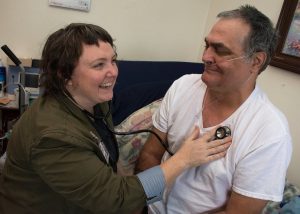 Laughter is the best medicine! Patient Stephen  Dedman makes a point to crack up palliative care nurse Katie Kusmaul at least once during a checkup.

CareOregon member and Housecall Providers patient Stephen Dedman often gets asked the same question: “How do you manage to keep your upbeat attitude?” Dedman, 59, who has been battling COPD for nearly 20 years responds the same every time: “I tell them that I have come to terms with my disease and with who I am. I know that it is incurable so am making the most of the time I have left,” he says.

Getting to a place of acceptance didn’t come easy. A long-haul truck driver by trade, Dedman continued with life as usual, driving cross country until 2006 when a COPD attack sidelined his career for good.

“I had to pull over and ask the police to call for an ambulance because my rescue inhaler wasn’t enough. I ended up in the hospital for a week and that is when they said no more driving and told me what I needed to do. I ended up only doing some of what they asked,” he says sheepishly.

Dedman said that was the first of what would be hundreds of hospitalizations over the next six to seven years. He picked up odd jobs here and there to make ends meet and was employed by City Teams Ministry for a time. But working would often trigger an attack, sending him to the hospital once or twice a week.

In 2011, it became apparent that he needed a supportive housing environment.

“The last time I went in the hospital they said, ‘You cannot make it on your own anymore,’ so they found me a temporary placement and then I moved into the adult care home where I live today,” Dedman says.

It wasn’t long after that things started to settle down for Dedman. He enrolled in CareOregon and his caregiver, having experience with Housecall Providers, recommended the in-home primary care program to him.

“My first nurse practitioner was Cathie Gurgle, and while I was still going to the hospital at times, she was able to monitor my condition and tweak my medication so that for three years, I didn’t go to the hospital one time,” Dedman says.

Having check-ups, shots, X-rays, and blood draws delivered in the comfort of his room has meant the world to Dedman who says that his life is so much easier since his medical care started coming to him.

“It just took the hassle of getting to an appointment out of my life,” he says. “I used to get so stressed out and that would make my condition worse.”

CareOregon too has been a trusted care partner for Dedman.

“I really appreciated that when I needed a wheelchair, a special hospital bed with a long rail, and a trapeze bar they didn’t turn me down or make me wait too long,” he says.

Dedman also received a Smartphone from CareOregon that he says helps him stay connected to friends, easily contact his Housecall Providers care team, and feel safer when he is out and about in his wheelchair.

In 2012, Dedman was dealt another blow when he was diagnosed with Diabetes. The knowledge of having two incurable diseases seemed too much even for a man who always sees the glass as half full.

“I didn’t want to talk to anyone or do anything at that point,” he says. It wasn’t long before his caregiver called his provider, Cathie Gurgle.

“Cathie came over and she has a way of cheering people up,” he says with a smile.

Although Dedman deals with the effects of his condition every day, he also has the support of his church and his Housecall Providers Palliative Care team, now led by nurse practitioner Maria Bucio, to address not only his physical symptoms but his emotional and spiritual questions or concerns, as well.

Dedman says that what he likes about receiving palliative care is that when he calls, they always respond. “Maria will send Katie [palliative care nurse] out to see what is going on and Katie will let Maria know that it’s time for a house call,” he says. That team-based support is the hallmark of Housecall Providers’ model and the reason why patients feel so “tucked in”.

With the support of his Housecall Providers care team and his positive attitude, Dedman will soon achieve his first goal, hitting 60 years old. “Once I hit 60, then I will go for 65,” Dedman says. “Like I told Katie: God’s not ready for me, and the devil thinks I’ll take over.”