Return of the House Call: How house calls can save the future of healthcare

House calls are an idea whose time will surely come around again. On Wednesday, June 4th more than 250 members of Portland’s community gathered for a breakfast forum at the Multnomah Athletic Club to discuss the future of the house call and its critical role in 21st century medicine.

“I truly believe house calls can save Medicare,
they may be the only thing that can.”

As Housecall Providers founder and medical director Dr. Benneth Husted surveyed the room, she noted that not long ago, the idea of providing quality medical care in the home setting was embraced by very few and filling a room to discuss house calls would have attracted even less. Clearly that view is changing as statistical evidence proving the value of house calls in saving money and reducing hospital admissions and readmissions has been gaining ground and media attention.

Keynote speaker, Dr. Thomas Cornwell, President of the American Academy of Home Care Medicine, asserted that Housecall Providers is indeed viewed as a leader nationally amongst healthcare professionals and legislators because of its reputation in delivering excellent care to the highest users of Medicare dollars – the medically fragile homebound patient. 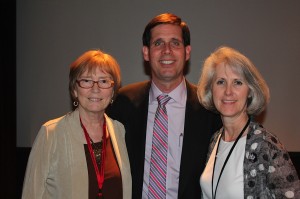 Later in the program, Dr. Cornwell and Dr. Husted were joined by CareOregon’s CEO Patrick Curran and Oregon State Representative from District 45 Barbara Smith Warner for a lively panel discussion on the potential of the house call to achieve the triple aim: better care, better health delivered at a lower cost. In fact, Smith Warner told the audience that Housecall Providers was in fact the inspiration behind the creation of Independence at Home , a national demonstration project that includes Housecall Providers and 17 other sites across the country testing an innovative care delivery model linked with shared cost saving.

Thank you to everyone who supported Return of the House Call, especially our sponsors CareOregon and The Lund Report. We look forward to the opportunity to present more forums in the future.