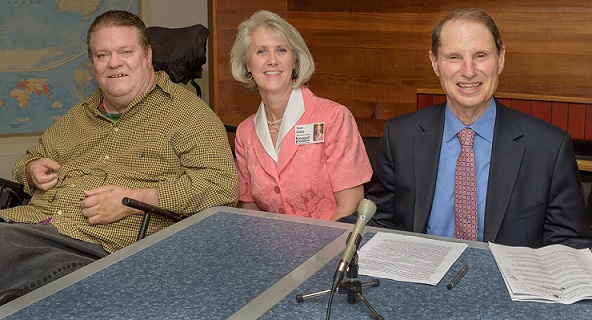 Senator Ron Wyden joined the Housecall Providers staff and board members at Myers Court, a QUAD Inc. facility today for a press conference to announce the second-year results from the Medicare demonstration project Independence at Home (IAH). Second-year savings totaled more than $10 million dollars for the 15 sites across the nation that served the 10,000 Medicare beneficiaries involved in IAH.

For the second straight year, Housecall Providers was the site with the highest savings per patient at 26% over the control group, which did not receive home-based primary care. This represents savings of $830 per patient every month. For meeting all six quality measures associated with the treatment of its 249 IAH patients, the nonprofit will receive approximately $1.1 million as its share of the savings to Medicare.

“To be able to deliver excellent patient-centered care to the chronically ill and save Medicare millions of dollars is a winning combination,” says Terri Hobbs executive director of Housecall Providers. “Sen. Wyden’s leadership has been critical to moving home-based medicine forward in America and I am certain he will continue to guide the national discussion until Independence at Home is made a Medicare program.”

Housecall Providers IAH patient and resident of Myers Court Mike Smith talked about what receiving in-home medical care has meant to him these last four years.  A quadriplegic, Smith remarked that doctor’s offices are simply not equipped with the resources or training to handle someone with his disability and that many times he was hesitant to even tell his doctor about a sore or a rash because of the fear of getting transferred to the table and what might happen.

“When I met Amy [a Housecall Providers nurse practitioner] I was amazed at the ease with which she examined me and the care that she took,” Smith said. “I can get x-rays, ultrasounds, and blood work all from the comfort of my bed. My life has never been the same.”

While Housecall Providers’ savings equaled year one’s results, the demonstration as a whole did not achieve as much in total savings for the second year as it did in year one ($25 million). Even though more patients took part in IAH in year two, revisions to the methodology changed the way that savings were calculated.

The demonstration will run through September 20, 2017.