No one should have to die alone- and thanks to a growing contingent of volunteers, many of our most isolated patients don’t have to. These volunteers are trained to sit with people who are dying, serving as a witness and a source of comfort in their final hours of life. For those who are afraid, who need a kind touch or the quiet witness of another human being, these special volunteers are ready to answer the call.

It was a Friday afternoon around four o’clock when the call came in. The staff of Housecall Providers was busy tying up loose ends, preparing to turn patient care over to the on-call team for the weekend. The last thing you expect at this point in the week is a call to action- but matters of life and death rarely keep business hours.
On the phone was Gillian Beck, hospice RN and unflagging patient advocate. She had a patient on our service who was showing all the signs of being very close to dying. This patient was lonely and frightened; she had no friends or family in the area to visit her. Her caregivers were providing as much extra care as they could, but they had other patients to attend to as well. Gillian asked if we had any volunteers who might be able to sit with her over the weekend.

Volunteer Coordinator, Todd Lawrence, sent out an email describing the situation and hoped that someone might step forward. The response was tremendous. Seven different volunteers made themselves available. “I thought at best I’d get one response, maybe two. But seven? It amazed me that so many people were willing to rearrange their lives to help someone they’d never met.” Todd said. 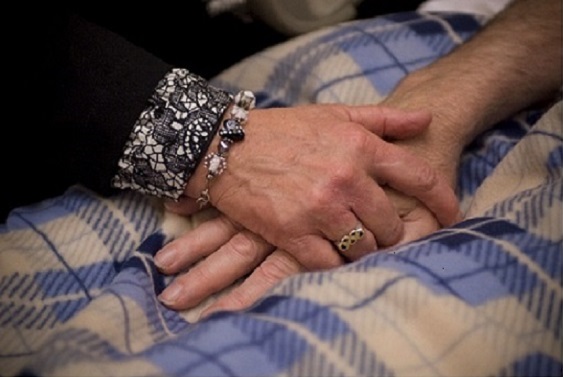 Next, he contacted the facility where the patient lived to make sure our volunteers would be welcome. It took quite a few calls to reach the patient’s caregivers, as they were also transitioning patient care for the weekend, but when we finally connected they were overjoyed to have some support.

One of the first volunteers who responded was Morgan, a paramedic who normally does her volunteering on Sundays. She was able to free up her Saturday morning to take the first vigil shift.
“It sounded like this patient needed company…I thought it would be very difficult to be dying alone so I wanted to provide support” Morgan said, when asked what prompted her to respond so quickly to this stranger’s need.

The art of holding a hospice vigil is simple in its implementation. Volunteers may speak to the patient, read scripture or poetry, sing softly, or play an instrument. These practices help soothe the transition for patients and families, but also provide a focus for volunteers to remain mindful. “I read my book, held her hand, and talked to her a little bit. Todd said she liked it when people held her hand. It was difficult to hear her have a hard time breathing so for me reading helped me just be present,” Morgan said.

While music and speech may soothe a person as they transition, (hearing is typically the last sense to fade), ultimately it is the simple presence of the volunteer which provides the greatest comfort.
The next shift was taken by John, whose 43 years practicing law helped prepare him for hospice volunteering by exposing him to “clients of every kind”. As a brand new volunteer- he had just completed training and had begun his first assignment a week earlier- Todd was a little worried that this vigil might be too much too soon. “But if you know John,” Todd said, “you know that nothing fazes him.” John reports that his experience holding vigil helped reaffirm his already held belief that “death is the culmination of life, and therefore a very important event.”
In John’s own words: “I felt honored to be at her side in such a personal moment. It was a humbling experience.”

Finally, there was Dave. Dave was a seasoned veteran; he had been volunteering with Housecall Providers for over two years. He spent all of Saturday evening holding vigil with this patient, and returned again Sunday morning. She passed peacefully with Dave by her side – a first for any of our volunteers.

Being present for this patient’s final moments dramatically changed the way that Dave views the process of dying: “I thought it would look more like a dramatic struggle or be more profound in some way, but when you see someone fade away the breath slows more and more and then finally just goes out and doesn’t come back in. It seems like the natural conclusion.”

When Todd learned that the patient had passed, he called to notify the numerous other people who had stepped forward to help. “I spent the next day talking to all of the volunteers who had participated or offered to participate – just making sure that everyone felt okay about what had transpired” He says. “At one point one of them said, ‘this is what I signed up to do as a volunteer.’ I suppose that pretty much says it all.”

In the past, dying in your own bed surrounded by friends and family was a common occurrence. In today’s world, where loved ones are often scattered, estranged, or simply far away, hospice vigil volunteers are more needed than ever. Todd isn’t worried about meeting the need-“I have an amazing group of volunteers that I am privileged to work with. None of us had met this woman previously- but she impacted all of us.”

If you would like to learn more about volunteering opportunities at Housecall Providers, you can contact Todd Lawrence at 971-801-4487 or tlawrence@housecallproviders.org.